My name is Nicole Kohr. I am a cystic fibrosis patient, a bilateral lung transplant recipient, and a resident of New Bern, North Carolina. I was born and raised in central New Jersey. I was diagnosed with cystic fibrosis - a genetic and life-threatening disease that primarily affects the lungs and digestive system due to an overproduction of music - at age five. This was despite being ill since birth.

Mom had to ignore doctor after doctor, all of whom brushed her aside. "It's just new mother syndrome," they'd say. Shortly after my diagnosis, they presented my mom with a horribly discouraging book and told her that I would die before the age of ten. She had a hard time trusting doctors after that, but we soldiered on in spite of it (thanks in part to our stubborn attitudes).

I spent many years pursing a career in the arts. In between community theater productions and NYC acting classes, I would be hospitalized for weeks at a time to receive IV antibiotics. It's very common for a cystic fibrosis patient to depend on long term antibiotic use. The theater world was very ableist and discriminatory, so I begged my mother to keep my disease a secret. My mother respected my wishes and supported my journey toward the Great White Way.
By high school, I had battled dozens of infections and viruses. I was absent more often than I was in attendance, and my symptoms were harder to hide. Despite my desire to pursue and B.F.A. in musical theater, my mom and I knew that my declining lung function would impact my theater career. We had an emotional chat about my future and the extent to which we had to be realistic.

I decided to pursue a B.A. in public relations. During my junior year, I met and began dating my (now) husband, Jared. He was studying IT. A mere two weeks into our relationship, I received a call from my mother. The doctors told her that my recent sputum sample cultured one of the two deadliest CF infections (mycobacterium absessus). I was distraught. My doctors advised that I dropped out of school. Mom was equally distraught, flashing back to my diagnosis days. I'd created a new version of myself at college, and I did not want to regress. I agreed to take on a complex course of antibiotics, which included self-administering round-the-clock IV antibiotics at college for seven months. I broke the news to my boyfriend right after that talk with my mom. He didn't even know that I had cystic fibrosis yet. Flash forward to 2015. We both graduated on time with honors, and I was no longer culturing mycobacterium absesses. But my lung function declined to the 50's. I worked at a nonprofit for three years. On the last day of work, I recall coughing blood (also known as hymoptysis) into a beaker I carried in my purse. On average, I reached about half a beaker per day. I was simultaneously running a feeding tube bolus under my desk, using a travel neb, eating a family size plate of pasta, and running an IV antibiotic.

At some point in my youth, I had a proper work-life balance, but I was no longer in a grey area. I was stuck in the red. I went on short term disability that day, then long, then SSD. I lost my identity. Worse, I identified as a burden. The stubborn girl who once traveled to NYC every day to pursue a Broadway career wilted onto the couch. I couldn't walk to the bathroom by myself. I was on 6 liters of oxygen and that was barely covering it. I felt defeated, depressed, and discouraged. My husband proposed to my in Disney World in 2018. He wheeled me to my own proposal in the 90 degree weather, our parents behind him taking pictures. It was magical. Shortly thereafter, I stopped breathing in our living room. I was rushed to the hospital and placed on an ICU ventilator. "It's time for a transplant evaluation," my doctors said.

We knew this day was coming, but it was still terrifying to hear. I was transported to the University of Pennsylvania Hospital in March 2019. My family and I stayed there for three days and took part in an intense lung transplant evaluation. I was told I probably have two months to live. We all paused. We were prepared to hear a lot of triggering phrases... but not that. I laughed. "Okay, sure," I said sarcastically. I'm still not sure if that layer of sarcasm was meant to protect me or my family. Probably both. I qualified for lungs under three criteria: end-stage cystic fibrosis, complete antibiotic resistance, quality of life. I spent the next few months planning a wedding and waiting on a call for lungs. It was a numb, confusing, and and vulnerable place to live. In fact, I was advised to cancel the wedding. Once again, my stubborn family and I refused to stop our life amidst the trauma. My husband and I married on June 1, 2019. My oxygen tank, lovingly named O2D2 was my flower girl. I weighed at mere 79 pounds. My lung function was 11%. I was transplanted 13 days later, June 14, 2019. I asked my mother to post my story on social media. The secrecy was no longer a benefit. I needed the support system. We all did. I was blown away when I woke from surgery. Despite all of the pain, the set backs, and the complications, my support system grew by several thousands of people. My family and I received cards, gifts, donations, letters... all of which inspired me to recover. More importantly, it inspired me to tell my story. I turned my existing LLC into a nonprofit, Colie Creations Inc. I spend my time writing children's books, musicals, blogs, etc. My mission is to advocate for patients through storytelling. I am also the acting Volunteer Engagement Chair for the Eastern/Central Carolina's chapter of the Cystic Fibrosis Foundation. I am so thankful for my second chance at life. I will continue to prove doctors wrong. My stubbornness will trump all medical trauma, and you will see my creations on Broadway one day.

My support system (including my mother and husband) inspired me to live a life of transparency. I believe storytelling is the strongest version of patient advocacy. 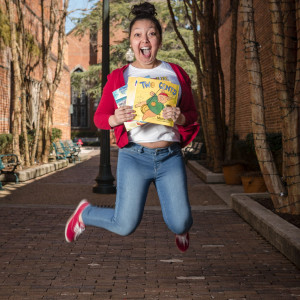