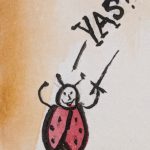 Three years ago I obtained mental health insurance for the first time. I thought I could finally get serious help with recovery from severe Developmental Trauma. Instead, the medical-psychology-pharmaceutical complex neglected, abused, traumatized, and gaslighted me so badly I was flattened and still trying to recover.

My then PCP put me on Lexapro, a Black Box medication associated with intense suicidal ideations in a minority of patients. I asked for a pharmacogenetic test, as I'd seen my friend's and it seemed important. My provider's response was, "We don't do that here."

The mega-hospital's "embedded" psychologist did not refer me to trauma-trained professionals as he had promised. Instead, he changed my treatment plan without telling me. He decided to keep me coming to him for one 30-minute visit per week on a random schedule. The psychologist ignored me when I told him I was having suicidal ideations and I thought it was the Lexapro. The following week I told him the ideations were worse, I'd had a bad encounter with a parent, had cut myself again and called to find out what happens to my IRA if I die." His response was, "Isn't that a normal question?" He again neglected to conduct a suicide evaluation. Instead, he told me I needed to make better choices. Then he went on vacation without helping me make a safety plan or referring me to another provider.

The suicidal ideations intensified while the bad psychologist was on vacation. I contacted the prescriber, my PCP. She asked about the ideations and then instructed, "Do not take that pill again. Go straight to an emergency room and tell them your PCP wants you to have a psych evaluation." This terrified me, but I went because I thought it would help.

Instead, the ER was the next step in an 8-day nightmare. They took my clothes and belongings, put me in a cold room with nothing but a chair, and left me alone. At some point a man came in to convince me to go to the mental hospital. I said I was afraid it would be like a Cuckoo's Nest. He assured me it would be a good place to go for just a few days, "a gateway to services" and I'd finally have a psychiatrist, and even Expressive Arts therapy.

In the wee hours they brought another person into the psych ER. She was agitated and the staff escalated the matter instead of helping her calm down. This culminated when they forcibly held her down and shot her with "booty juice" as she screamed "GET OFF ME! GET OFF ME!" That scenario intensely triggered memories and flashbacks of my own experiences of abuse with pinning. I felt like all of them were happening again. I could not move for the terror in my body.

When a staffer came in to tell me they'd soon be taking me out of there to the mental hospital, I said I had been triggered by that scene. The staffer looked at me like I was speaking gibberish. Soon, I was on my way to the Rockford Center for Behavioral Health, unaware that I was in for a week in institutional hell.

Rockford staff violated my rights first thing! They made me sign a paper that said I had received a copy of the Patient's Rights before I received it. She only gave the paper to me moments before I went through the locked door where they would terrify and harm me, without offering any actual help. They strip-searched me, which gave me flashbacks to the traumatic strip-search I endured as a teen. They took my phone and purse, assigned me a room, and told me I would meet with a psychiatrist.

The psychiatrist was an angry person who didn't really care about her patients. She tried to tell me I had to stay on the Lexapro "a few more days." I told her no way; my PCP said to never take it again. The psychiatrist tried to convince me I had to stay on Lexapro because I couldn't suddenly quit. I told her my PCP said I didn't have to taper because I'd only been on it a few weeks. The psychiatrist relented. She put me on a different SSRI with a Black Box warning for suicidal ideations. Also, some other meds supposedly for sleep and PTSD. None of the meds helped, only gunked up my brain.

There was no individual therapy or counseling, the group therapy was generally lame or even awful, with one poor staffer admitting, "Um, I've never led a group before and they didn't train me or even give me a handout." Living quarters infested with roaches, and cafeteria food that was mostly fried fatty things. The cafeteria smelled like rancid grease and the sewer backed up at lunch one day. The "dietician" told me the cafeteria couldn't meet my Whole Foods Plant-Based diet because that's not how they work. Many days I ate only apples for which I traded the crap food they gave us at break time.

One day they gave the booty juice to an elderly woman, whom they then left in a chair in the dayroom. She sat in her urine and diarrhea for over two hours before they cleaned her up just in time for her family's visit. They doped her up again and left her in a wheelchair all day, without fluids or nutrition. Her breath smelled like acetone.

Within a few days, I understood this was a place where they threaten self-admitting patients with commitment if they want to leave before their insurance coverage runs out. This terrified me. I felt so trapped! I decided to not give them any reason to keep me and to make note of everything I saw. I talked to other patients who said they'd been threatened with commitment. I lined up a lawyer to intervene, too. But their plan circumvented this. The psychiatrist merely changed my medications a little and that gave her the right to keep me another 48 hours!

I spent a total of 8 nights in hospital without medical necessity, after which I could barely function for months, in part due to the polypharmacy withdrawal. I soon found the Buzzfeed News investigative report, "What the Fuck Just Happened," about the parent company that owns Rockford and about 26% of mental hospitals. America's largest mental hospital chain is notorious for patient abuses such as I endured, witnessed, and heard about. Staff are pressured to trick people into coming and threaten those who wish to leave. Universal Health Services (UHS) makes almost a 30% profit by cutting staff and services. The article was almost 1.5 years old, so *how* could this still be allowed to happen?

Since my unnecessary incarceration, I have filed complaints with the mega-hospital's so-called Patient & Family Relations office, and with all the licensing and facilities boards I could find. None of these provided any resolution; they all protected the perpetrators at my expense.

Last year, UHS settled a $122M fraudulent billing lawsuit with the DOJ and 15 states, including mine. This was for their illegal billing for patients who did not need to be there, and those who no longer needed that level of care. The states got back a wee bit of the stolen funds, the whistleblowers landed $6M. None of the victims received anything. All the suit cared about was some funds. Nobody in UHS was held accountable, and the deep harm to their victims is still unacknowledged.

The injustice is unreal!

I am motivated by the unconscionable harm I received when I asked for help with Developmental Trauma. I saw the same thing had happened to most of the people in that ward: early trauma in a chronically toxic childhood environment gave rise to mental health issues upon which the predatory system fed without regard for the human lives it serves to destroy in the name of "mental health care." I need to Make. It. Stop. however I can.

Therefore, became a Trauma-Awareness Activist-Artist. I paint watercolors about my experiences as well as the neurobiology of trauma and other concepts for education. I started the #TraumaAwareAmerica initiative, to inform providers and empower survivors. I spread the word that PTSD is not a "mental condition" that needs fixing by drugs, but a neurophysiological condition caused by the entrained firing patterns of the subcortical brain, particularly the amygdala. That nearly all mental health conditions can be traced back to Developmental Trauma, and we can help each other heal.

I've been a guest on several Facebook Live events as well as podcasts and a radio program. I gave a 1-hour "Intro to Trauma Awareness" virtual class to my (new) PCP's office. I have developed handouts for my providers so they can be more trauma aware. I also collect and distribute other worthy materials. I promote the Trauma-Informed Care training hosted by the non-profit Zero Abuse Project. I continue to lobby the mega-hospital for TIC training and other harm reduction measures. So far no luck changing the system. However, I have had luck changing individuals within the system. For instance, I had the first trauma-aware procedure in the mega-hospital OR. This due to my doctor's remarkable ability to recognize I'm telling the truth and this is neuroscience I'm talking about. Hooray!

Many people have told me I inspire them to keep trying, speak out, or help others. This satisfaction is my reward and compensation. Given the level of trauma I endured and the havoc it wreaked on my nervous system and entire body, coupled with the lack of appropriate treatment and my age, I expect I will not live many more years. I hope in my remaining time to continue to inspire others and give them hope for recovery. 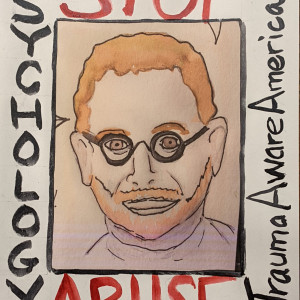 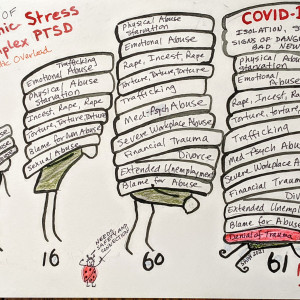 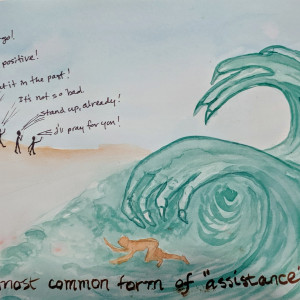 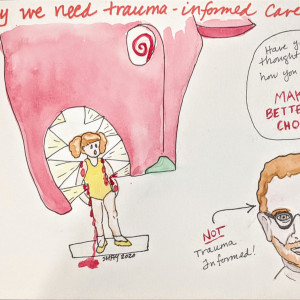