Lupus in Men – How One Such Man is Leading a Community 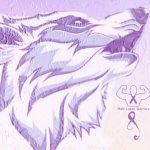 My name is Emmitt Henderson III, I was diagnosed with Systemic Lupus back in 1995, however, I had a visible rash all over my upper body and arms that resembled the symptoms of Discoid Lupus. This took a toll on my skin when I was a young boy at the age of 10 in 1980 for about a year. Back then it was not diagnosed as a form of Lupus but treated as a skin disease of unknown origin. This lasted for about a year, then faded away on its own.

15 years later, I had joint pains in my knees, wrist, and shoulders that I could not explain. They were so bad I went to the emergency room a few times, just for them to send me home saying they cannot find anything wrong, keep in mind all they did was X-rays at that time.
Over time, pain settled all over my body while maintaining my full-time job as a Service Manager at an auto shop. Despite my pain, I pushed through and went to work every day. New pains developed in my lower back and one day at work, my pain was so bad that the owner of the company noticed it and wanted me to go to urgent care to get checked. I fought him, but he is the owner, so I went.

After being in urgent care for 8 hours, the doctors told me they needed to send me to the hospital for further diagnosis because what was going on with my blood work, I was told, it was out of their hands. They brought me to the hospital by ambulance and I was there for over 3.5 weeks.

Within 2 weeks, I went through every type of blood test they could do on me, they performed test after test and still did not have an answer for me. Then on the 19th day, a woman introduced herself as a Rheumatologist and told me that based on the lab work, she believes I have a disease that is rare in men. She also mentioned that based on my ethnicity and age, I do not fit a candidate for this disease, so she said she will need a few more days to confirm. 4 days later, I was told by her, I have Systemic Lupus Erythematosus. The first question I asked was, “What is that?”

As I got to learn about Lupus, I learned it was a women’s disease and it was rare in men. 1 out of 10 men are diagnosed with Lupus compared to women. For the first 3yrs, I kind of kept it to myself because as a man, it was embarrassing to explain to people what Lupus was. I could not help the flares and I was getting hospitalized a lot. Friends were concerned what was wrong and all I would tell them, is that I had an autoimmune disease.

Through the years with Lupus, I went through major complications in my life because of it. It has affected almost every major organ and system in my body and most current, my brain. Some of the most notable procedures included a Clinical Trial which was a Bone Marrow Stem Cell Transplant to slow my Lupus activity down, a Kidney Transplant, a Right Knee replacement, a Left Shoulder replacement, my Gall Bladder removed, I had lung failure which caused me to be on oxygen for a few weeks, I had been diagnosed with Rheumatoid Arthritis, Sjogrens Syndrome, Reynaud’s Syndrome, Mixed Connective Tissue Disorder, Gout, Shingles, and I had a port installed for blood transfusions, then removed when replacing my shoulder, I went through Chemotherapy and Radiation Treatments, I performed Peritoneal Dialysis for a year before the kidney transplant. I also had Ulcers in my throat and esophagus causing my throat to close and I was fed with a feeding tube for 2 weeks, I went through Cardiomyopathy of the heart that caused heart failure. Because of the heart failure, I was put in a clinically induced coma, then after 3 weeks, I had to go to rehab to learn to walk, talk and use my limbs again.

I was on a cocktail of medication that amounted to up to 30 pills a day at my worse. The Steroid I was on, made me gain over 45lbs of water weight and put a toll on my body physically. During that time, I felt Depressed because of how I looked, but I did not fall into Depression. I was too strong mentally to accept that my life is over considering everything I was going through with this disease.
Going through it all, I maintained a positive outlook on everything because of my strong Mental Health. I became stronger mentally where I was ready to accept whatever Lupus brought to me physically. It made me the Warrior I am today.

I created my Nonprofit Organization, Male Lupus Warriors Corp. During my journey I haven’t found too many men speaking out on Lupus, so I decided to be the Voice. I decided to publicly advocate and tell my story to the Lupus Community in hoping to Inspire others. With all that I have been through with Lupus, I am still standing strong.

Because of my Advocacy, I’ve been on many platforms talking about my journey. I’ve been on Interviews on Lupus, Mental Health, Men’s Health, Transplant Platforms. I’ve been on Local News here in San Diego for hosting my own Lupus Walk event and spreading Lupus Awareness, and I’ve been featured in written articles and magazines. I was Presented an Advocacy award from the state of Georgia for my work in the Lupus Community, I was presented a plaque for outstanding advocacy in the San Diego Community from another local Lupus Organization and I received another plaque from Inspire San Diego for Community work in the City of San Diego. I am currently involved in notable positions with different Lupus and Autoimmune organizations including my own.

My goal for Male Lupus Warriors Corp is to educate, inspire and spread awareness on Lupus and to let everyone know that men get Lupus too. It is also to encourage the men to speak out on their illnesses and come together to help others.
​The Purpose of Males Lupus Warriors Corp Nonprofit Organization is to provide the Community Awareness about Lupus, to assist individuals/families with Autoimmune Disabilities by providing education, wellness, support and Financial Assistance to Accommodate Financial Hardships.

We are Strong men already, telling our story on how we are overcoming any auto immune disease or whatever Life brings us, makes us look even stronger. I speak on Lupus and Mental Health in hope to encourage people to not be a victim to their illness but to live the Life they intended to for themselves and their families.

What keeps me motivated is the feedback I’m receiving from my Advocacy to inspire the Lupus and Autoimmune Community.

My aspiration is seeing other warriors thrive 🙌🏾 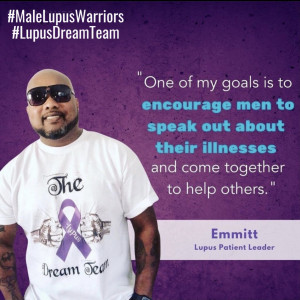 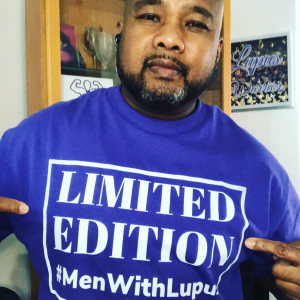 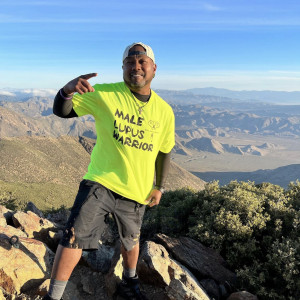 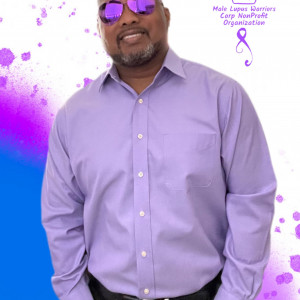